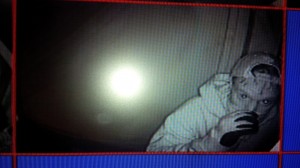 A recent brazen robbery occurred April 23,2013 at a retail Phone store in Woodbridge in the Hwy 7 & Weston Road area.

Two suspects entered the store from the front door bearing axes in hand in an aggressive smash and destroy rampage causing thousands of dollars in damage to property in an attempt to gain access to popular iPhone and Blackberry cell phone inventory.

Police are looking for this suspect and we are appealing to the public to see if you know who this person of interest is. If you know who this individual is please contact York Regional Police Holdup Squad and assist the Woodbridge community in making the streets a little safer.

Many stores in Woodbridge have been experiencing a rash of early morning intrusions whereby thieves attempt to steal cell phones from local brand name cell phone stores. Thieves are looking for merchants who keep the inventory in easily accessed and unsecured areas that usually net the culprits lots of product.

Shop owners are warned to upgrade where and how they store inventory to prevent any further losses from these kinds of intrusion to fend off any further success for the suspects.

We offer many solutions including custom bars, security film, roller shutters and TL Rated Vault cell phone storage units that will make it virtually impossible to ever lose a single phone while secured.

Smash & grab intrusion is becoming a real problem in Woodbridge and store owners need to immediately properly equip the premises to withstand these kinds of attacks that have most likely netted this duo huge success in the past.