What is Exit Hardware? 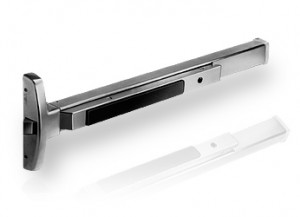 The title says it all. What is exit hardware, what is it used for, where should it be used, etc. The term “Hardware’ today usually conjures up images of mother boards, and other technologically inclined physical parts. This, of course, is very wide of the mark, which may even seem funny to those who work with exit hardware. So let’s clear this up and explain quickly to the layman what exit hardware is.

If you are someone who owns or works at a reasonably large business, or large public building, you will immediately recognize what exit hardware is, even if you were not familiar with the term itself. Once pointed out, things like crash bars or panic bars, as well as alarms triggered by certain doors being opened, exit hardware and it’s proliferation everywhere is very apparent. Breaking it down though, it is hardware that assists you when you are attempting to open doors in public locations quickly and efficiently in the rush of a panicked crowd, or the fire alarm that goes off when specific emergency exit is opened. It is hardware that makes sure you and your loved ones get out of a dangerous building, even in the case of a human stampede.

The call for devices such as crash bars and emergency exits can be traced back quite far, at least as concerns for safety of the individual go. A famous example is the Victoria Hall disaster of 1883, when nearly 200 children burned or died of smoke inhalation when the exit door to a theatre was bolted and a fire broke out. In England, this led to the first reforms in government safety standards for buildings, particularly public theatres and the like. This spread about the world, though not rapidly, many countries having to experience similar tragedies before adopting similar laws.

Even with extra mandated exits being installed, there was still a problem. In the event of a fire, people tend to panic and bunch up. This can cause the individuals at the door incapable of taking the simple action of turning the knob so that the doors could swing open, because of the crush of people pushing, panicking from behind them. Of course, even then, if the doors need to be opened by pulling inwards…well, that made a serious situation much worse. People in a panic tend not to listen to or think with logic, such as moving out of a building in a calm and orderly fashion.

As such, there was a need for exit hardware that catered to this specific situation. Therefore; the birth of items like the panic bar. A panic or crash bar is a bar that can be pushed in order to unlatch the door. No turning, fiddling about, no worries about those behind you, as they will force you out anyway. Of course the crash bar must cause the door to open outwards, either to exit on to the street or into another area where you can make your way to the street. You may notice that most large buildings have bars to push their doors open, and they always open outwards, towards the street. This is all part of the exit hardware strategy of allowing people to escape a building quickly and easily. A door used exclusively for emergency exit will only have a way to open the door easily from one side, the side the crash bar is on. This is to make sure some other person isn’t trying to enter through the emergency exit, causing a collision between those trying to escape and those trying to enter. This is a dangerous situation to.

Over the years, several advances have been made in exit hardware, improving crash bars, adding alarms to emergency doors, etc. Exit hardware is frankly that simple, it helps ensure a safe exit from the building no matter what.